With 2014 quickly approaching, this week we have been enjoying being reflective and looking back at the highlights from 2013 - we can't believe how much has happened! We've made clothes with Bugs Bunny, turned watermelons into shorts for Nasty Gal, welcomed six new members of staff to our team and a whole lot more. So today we're inviting you to join us in a count down of the best thirteen things that have happened at Lazy Oaf in 2013. Keep your eyes peeled as you might even be featured.

Â  1.LAZY OAF X KICKERS.Â  We kick started this year with the release of our first ever shoe collection, our collaboration with Kickers. We took the classic Kickers boot and gave it a Lazy Oaf twist with rainbow soles, 3D glitter and detachable bows designing shoes that were both wearable and collectable. The collection launched with our first ever fashion video featuring the Bloom Twins shot by Joao Retorta. 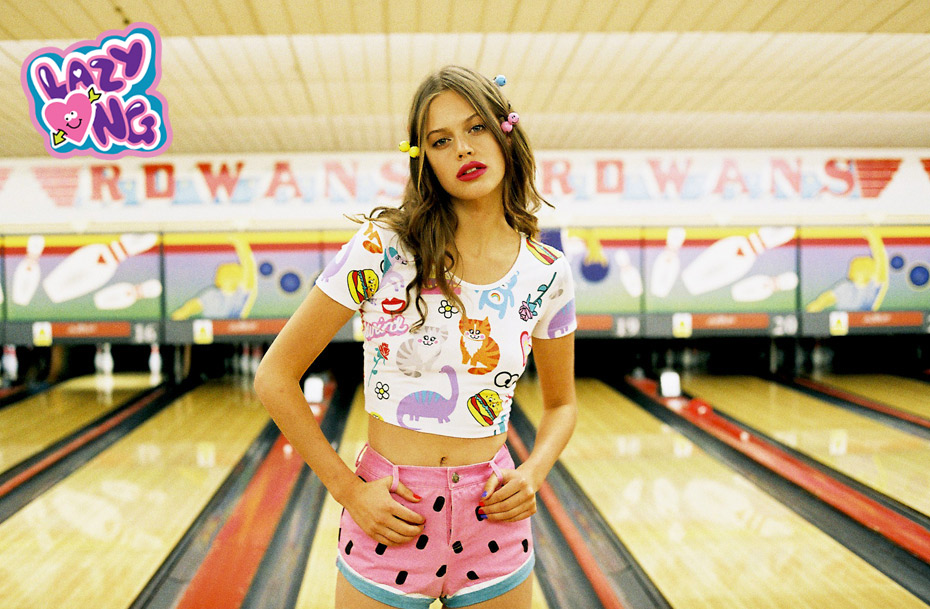 2. LAZY OAF X NASTY GAL.Â  For SS'14, we teamed up with one of our favourite stockists, online LA store Nasty Gal, to design a high summer collection packed full of prints of rainbows, kittens and smiling fruit that let us pretend we were 13 all over again. And if there was one design that really got your mouths watering then it had to be the watermelon hot pants that sold out in a matter of weeks, American starlet Ariana Grande even bagged herself, and nearly exploded our Instagram in the process. Rumour has it that the shorts might be returning in 2014, but you'll have to wait and see... 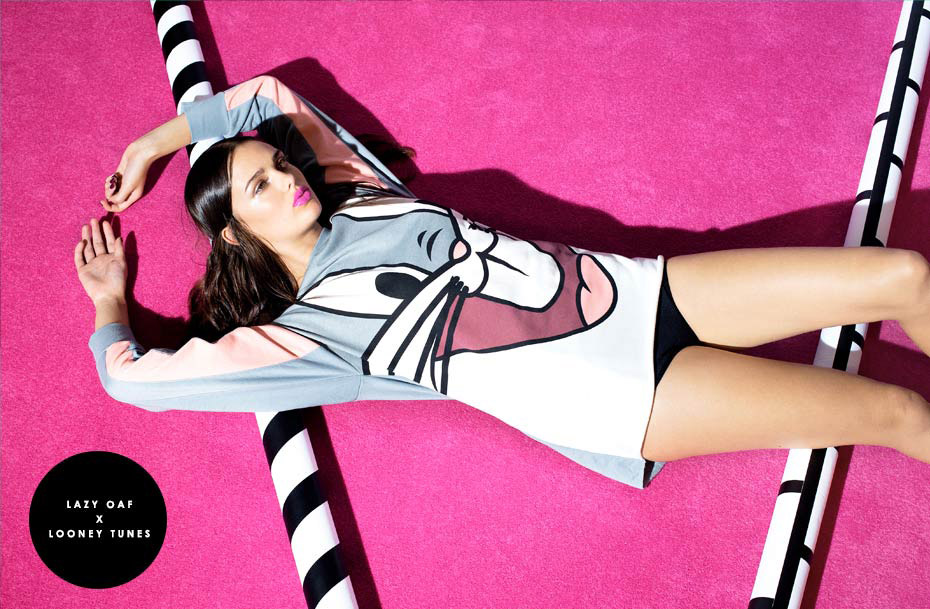 3. LAZY OAF X LOONEY TUNES.Â  Following on from our Batman collection in 2012, for 2013 we once again teamed up with Warner Bros, but this time it was to work with our favourite cartoon collectiveÂ Looney Tunes. Releasing in October, this was probably the most fun we have ever had designing a collection, who wouldn't want to wear Tweety Pie's face on a jumper or Bugs Bunny all over a tracksuit? And judging by how quickly many of the designs from the collection have sold out, we think you lot liked it too. It's also been a hit with musicians with Rita Ora, Hayley Williams from Paramore and Left Brain of Odd Future all spotted in various pieces. Click here to see what's left before it's all gone. 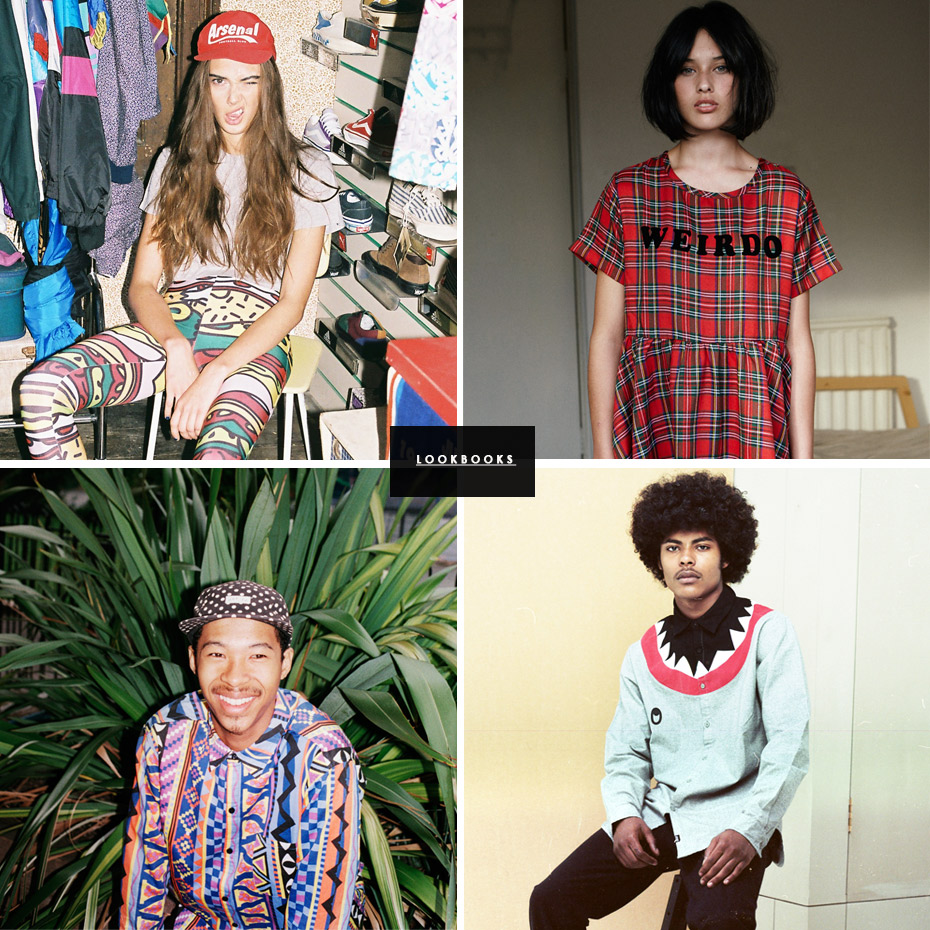 4. PHOTO FAVOURITES.Â  When we decided to jet off to Los Angeles to shoot our SS'12 lookbooks in January, we knew it was going to be a good year for photo shoots at Lazy Oaf and while not all of the locations have been quite as glamorous, we've had fun working with some really talented people who have helped us bring our collections to life. We'd like to give a shout outs to photographers Viktor Vauthier, Leonn Ward, Piczo, Dan Wilton, Sam Hiscox, Anna Victoria Best, Michael Mills and Mehdi Lacoste who have taken some amazing photos for us to share with all of you. Not to forget all of the great models who've have been the face of Lazy Oaf for the past twelve months. Click here to see all of our lookbooks from the past 12 months. 5. OAF ON FILM.Â  Nothing brings a collection to life quite like a video which is why, in 2013, we decided it was about time we start filming our lookbooks as well as photographing them, and we have definitely enjoyed the results. We've filmed flocks of seagulls, boys on skate boards and girls eating cereal accompanied with catchy soundtracks by up and coming punk, indie and electro bands. You can see all of our videos over on our Vimeo page, our latest one features a very tasty Christmas burger.

6. IN STORE.Â  At the end of December 2012 we had to shut up shop and move down Carnaby Street to 2 Ganton Street which has become the new home of the Lazy Oaf Store. While it took a while for you all to get used to our new location, it wasn't long before we were settled in and were throwing bigger store parties than ever before. Hosting an event nearly every month this year, the shop has treated you to everything from Herman Ze German hot dogs in the summer to mulled wine in the winter as well as guest DJs, tombolas, tattoo parlours, pop-up nail bars - you name it, we've done it. We even transformed downstairs into an Oaf License complete with pick n' mix and our own range of saucy top shelf magazines. With our January sales from 27th December and a shiny new refit in the new year, you can expect big things from our store for 2014.Â 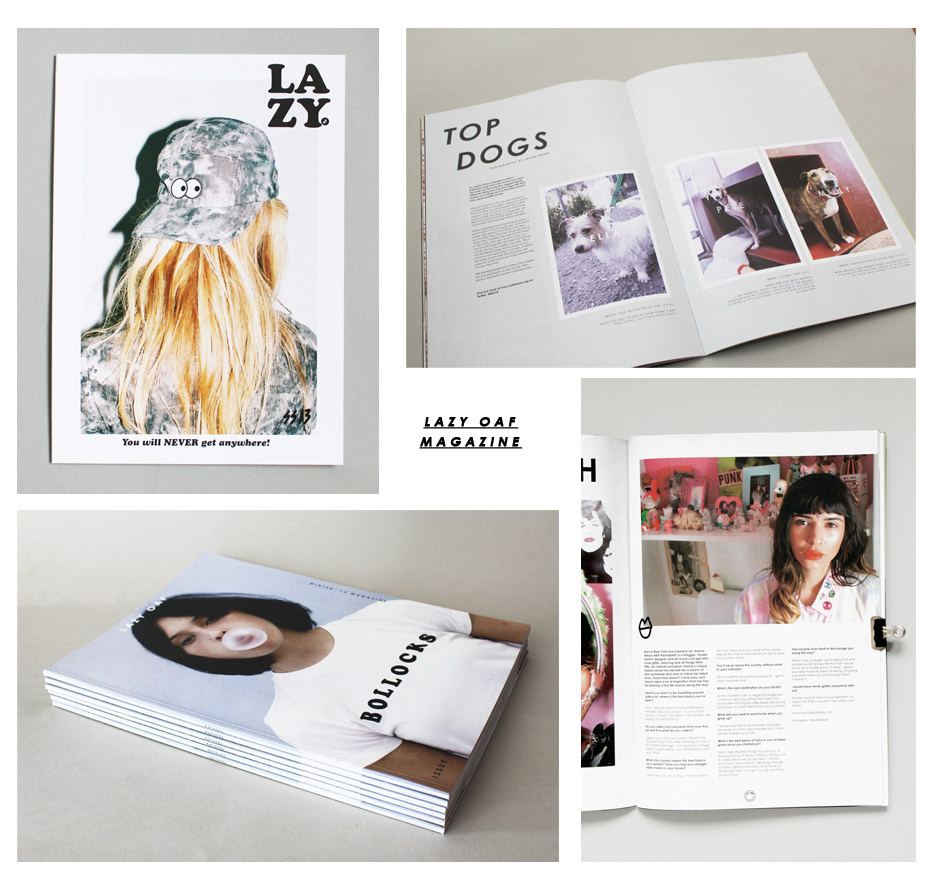 7. YOU WILL NEVER GET ANYWHERE! While we have made magazines before (anyone remember the Amazine?), for 2013 we decided we wanted to make a magazine that not only showcased our latest collections but also let us share our inspirations and things we like with all of you. We made two issues to sit alongside our SS'13 and AW'13 ranges with features including interviews with bloggers, actors and photographers, open submissions, food reviews and original artwork. We even got to meet some of the dogs looking for a new home at Battersea Dogs & Cats Home for a special feature. The best thing about the magazine is that we made it totally free to order online or pick up in our store. We're already looking forward to working on our next issue that will be out in March. 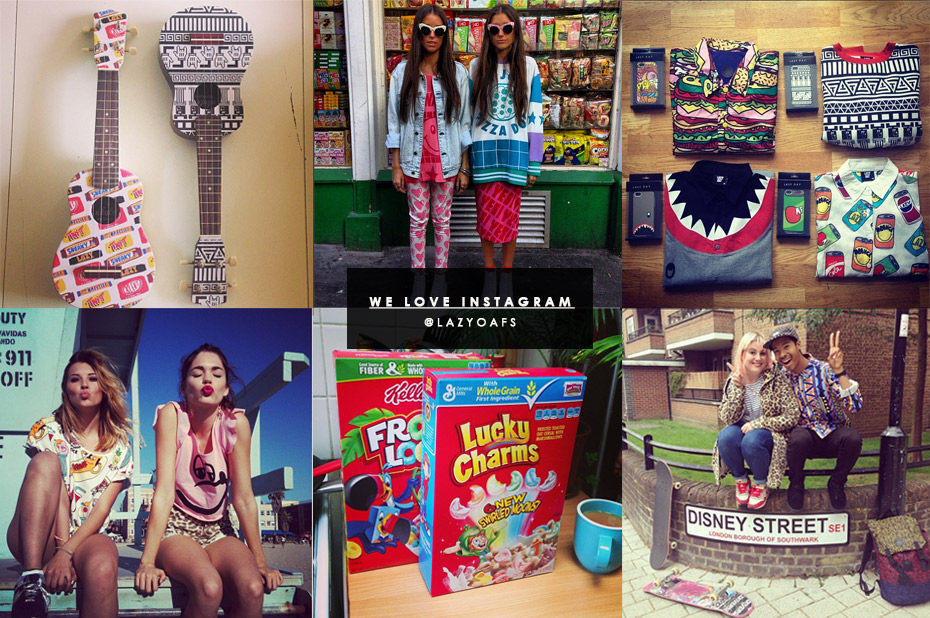 8. INSTAGRAM IT. If there is one social media channel that has had us hooked to our phones more than ever than it has to be Instagram and 2013 has definitely been the year for @lazyoafs. We started the year with a handful of followers and have ended it sharing photos with over 72k of you and we're loving your feedback (well most of you!). As a visual brand, Instagram has become our favourite place to fill you in on all the latest goings on at Lazy Oaf. We treat our followers to first looks at new collections, behind the scenes footage from our HQ and even special discounts and competitions like our big one with Nasty Gal. If you're not following us yet then you're missing out!

9. YOU LAZY OAF'S. Â  Nothing motivates us more as a brand than getting to see all of you wearing our designs in your own unique way across the globe and this year, you have done us proud once again! Thanks to Instagram, and that all important #lazyoaf, this year we have been able to see more of your outfit efforts than ever before. In fact we areÂ so impressed that we have introduced a #lazyoaf of the week feature where we post of favourite look of the week on our Instagram every Sunday and reward them with 25% off their next purchase. If you've got a good lazy look then be sure to post it, because sharing is caring. 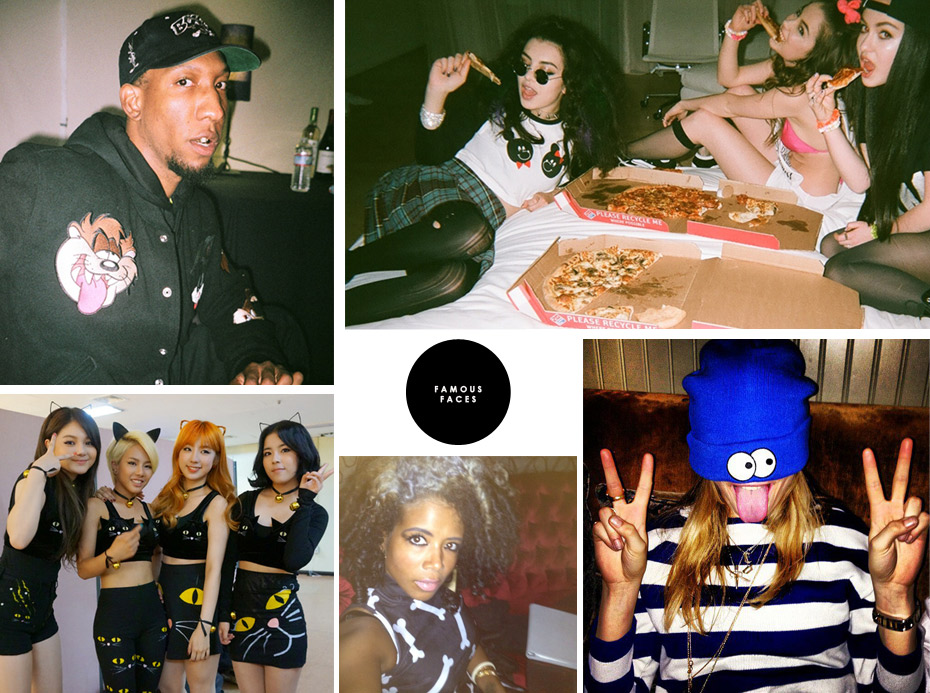 10. CELEB SPOTTING.Â  When we're not busy checking out all of your outfits, we like to try and find out what famous faces are wearing Lazy Oaf and this year there have been some winners. Arguably the most famous British face of 2013 model Cara Delevingne was spotted pulling her iconic silly face in our eyeball beanie whilst chart topping singer Charli XCX has been spotted wearing nearly every crop top we've released this year! We've also been causing a stir in the K-pop scene with girl groups Girls Generation and Tiny-G dressed head to toe in Lazy Oaf in recent music videos. We've had some very exciting people putting orders in recently so we're looking forward to seeing the results in 2014. Who's it going to be...? 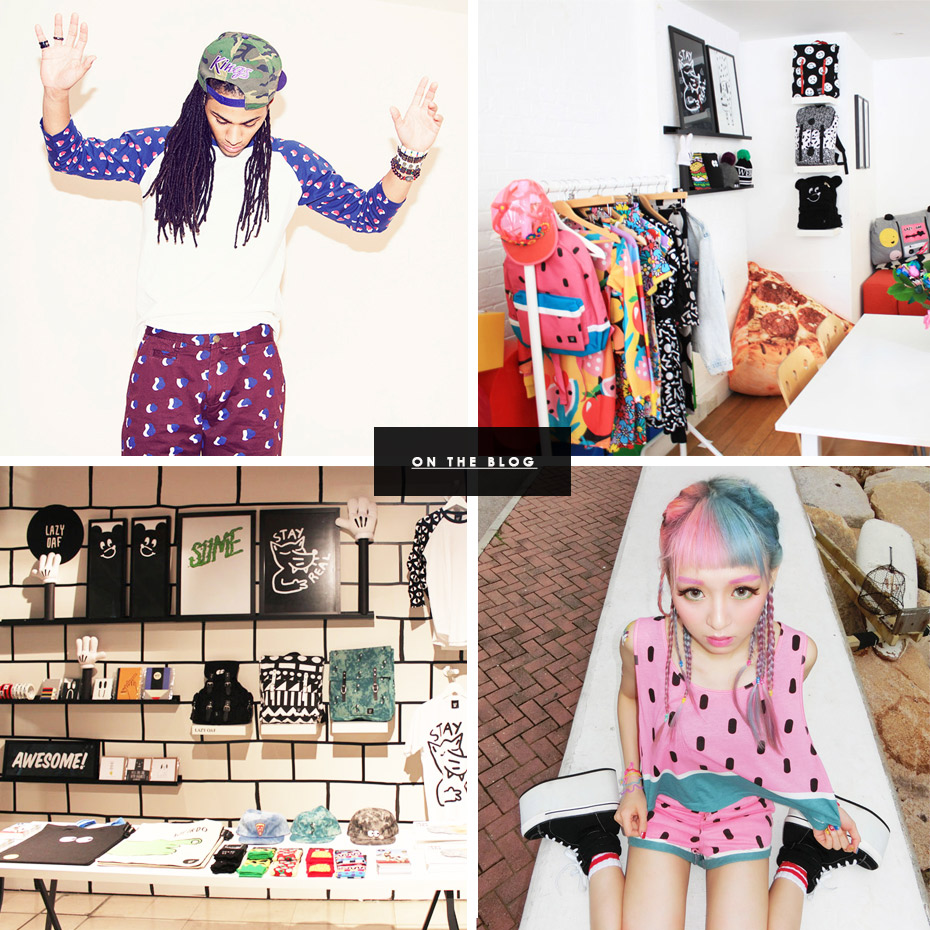 11. BLOG ALL ABOUT IT.Â  With blogs and online magazines taking over the way we read and pass on information, this year we have upped the anti on our blog by introducing a whole string of new features that go beyond our latest collections. We now tell you about what we're loving with our weekly round up See You Next Tuesday, we interview some of our favourite musicians, models and artists and have introduced our latest feature Studio ToursÂ where we visit the studios and homes of some of our favourite creatives. 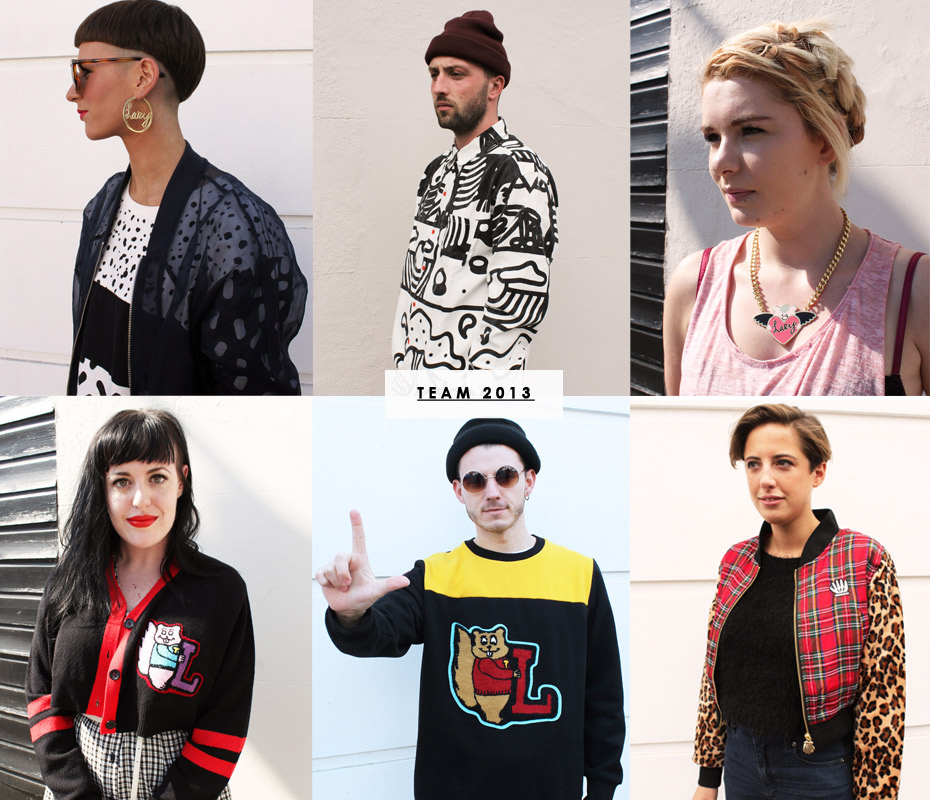 12. TEAM WORK.Â  It's been a big year for change in the Lazy Oaf office in 2013 as we have welcomed not one, but five brand new members to our HQ team. Our once intern Jake is now our Design Assistant and press intern Emily became our Press and Marketing Assistant. We then welcomed Sinead as our Stock Coordinator, James as our Men's Press and Marketing Coordinator and Alice as our latest addition to the design team as well as Faye who joined as our Store Manager at the beginning of the year. We'd also like to give a special mention to our excellent intern Katie whose drawings you will have seen grace the pages of this very blog. Â Sadly, this December we are also saying goodbye to our favourite office scouse, European Wholesale Manager Paul who, after two years on the Lazy Oaf train, is leaving us for pastures new. We're gonna miss you Paul!

13. BOB DOG.Â  Last but, by no means least, is another new member of the team, our founder Gemma's very own Bob dog, theÂ miniature schnauzer. We've watched Bob grow from a tiny pup into one handsome young man with many howls and hugs along the way. He's quickly become an iPhone camera sensation in our office, especially with his array of neck wear featured above. So yeah, that was 2013. If we've missed anything out then make sure you let us know and let's hope that 2014 has even more to offer...anything could happen.