Although I live in the bustling city of London, sometimes I find my weekends can be a bit samey. I hang out in the same bars, eat in the same cafes and sit in the same parks. So when my friend Lisa suggested we attended Secret Cinema on the Saturday before last, I knew I was in for a treat. Secret Cinema is an interactive cinematic experience where you buy a ticket, meet in a secret destination and have no idea what film you are going to see. I went along to witness it with my very own eyes and have decided to let you all in on what was a truly mysterious and magnificent day. Unfortunately my camera wasn't up for the job so photographer Mike Massaro has kindly let us to use some of his quality snaps.

After receiving an email asking us to meet at Canary Wharf Station, Lisa and I headed on down, both of us having absolutely no idea what to expect. The email had suggested optional fancy dress and requested we came in goggles. As my ski goggles were back in Bucks and I was short of time to shop, I decided to take this request light-heartedly but oh my was I in for a shocker. 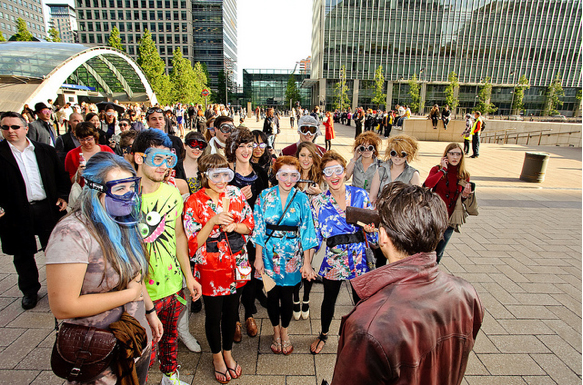 When we showed up EVERYONE was in goggles and fancy dress with wigs, fish nets, tutus and floor length trench coats - a definite 10/10 for effort. We, on the other hand, were left feeling like the only kid at school who forgot it was mufti day! 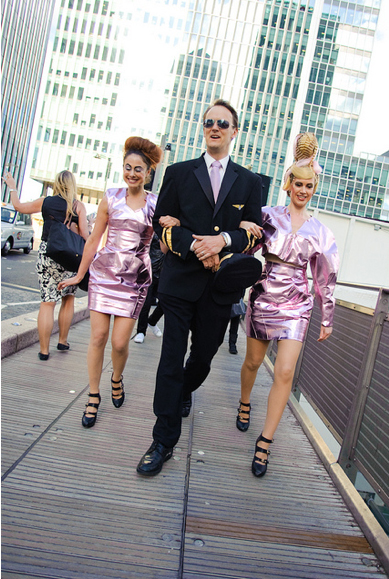 On arrival, we were greeted by a group of glamorous air hostesses, think less Ryanair budget flight and more Britney Spears in the Toxic video. With dresses to make Jean Paul proud and hair styles that looked good enough to eat, the girls hurried us into a swanky black out coach to take us to an unknown destination. With sound effects and live performers all the way there, I already felt like I was in another world. 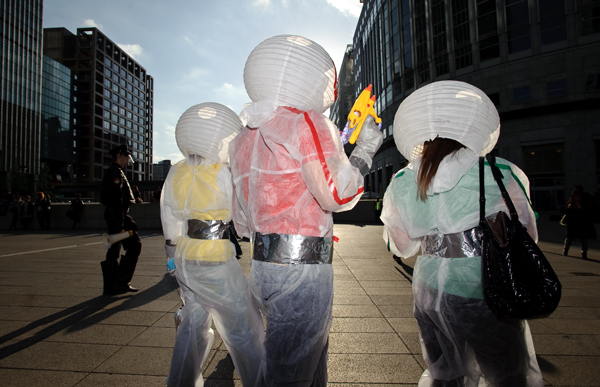 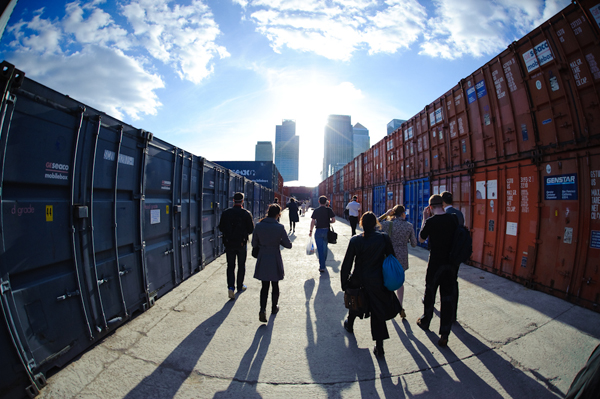 We were dropped off in what appeared to be a disued industrial site set back from Canary Wharf's high risers. Walking through, we were greeted by beggars, watched dwarves smash up cars and got screamed at by a man with an unnerving look in his eyes. 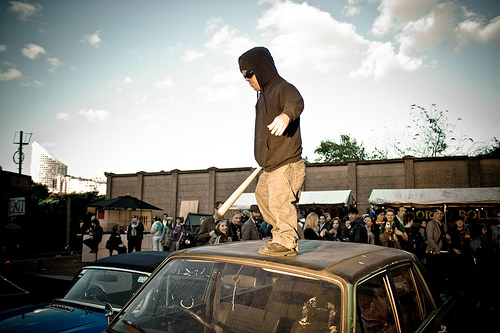 We then stepped into a giant warehouse transformed into a futuristic China Town with snake charmers (Lisa held a real life Boa), sushi stands, go-go dancers and robots. Despite hints from friends, I specifically didn't want to find what the film was going to be. On entering I was still noner the wiser but luckily Lisa soon worked it out as she had played the computer game many moons ago. 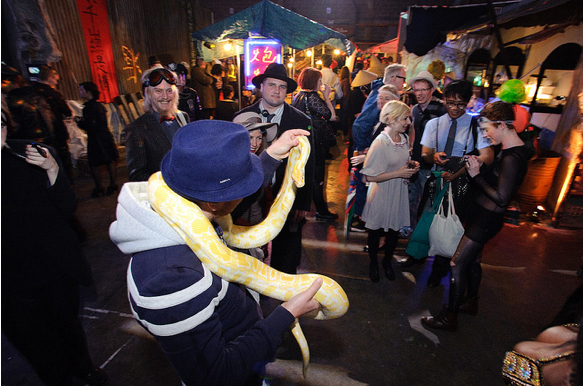 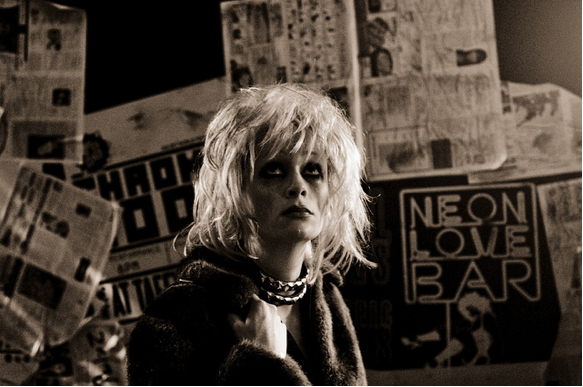 Actors perfomed live in front of our eyes as we walked around, each representing a different character from the film. 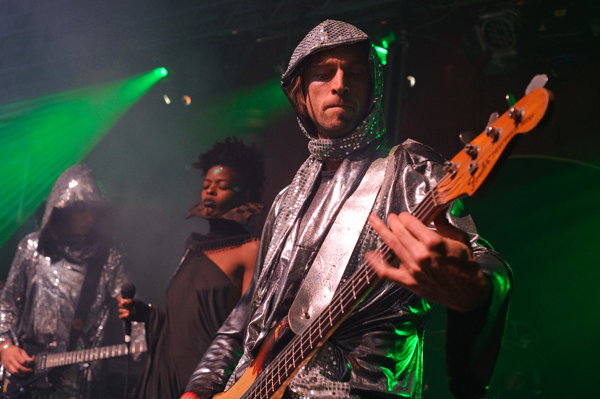 We were treated to a live performance from futuristic electro act Chrome Hoof who certainly dressed the part. 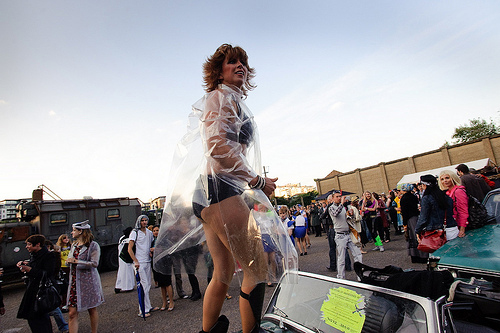 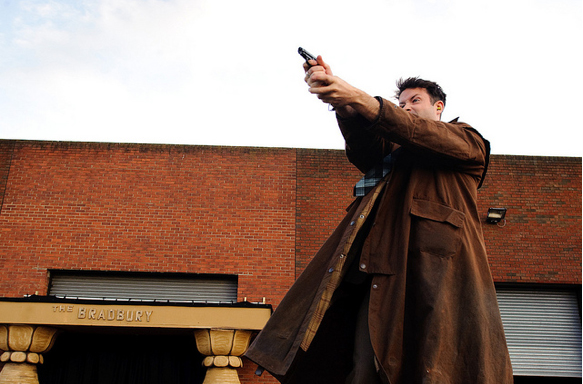 After about 45 minutes of full on entertainment and food (a delicious falafal wrap), we were ushered outside and witnessed a live shooting - pretty scary stuff. 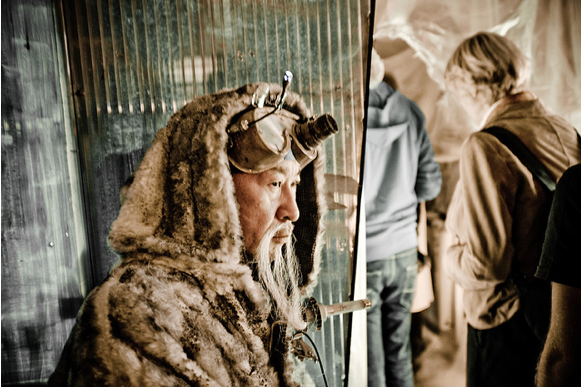 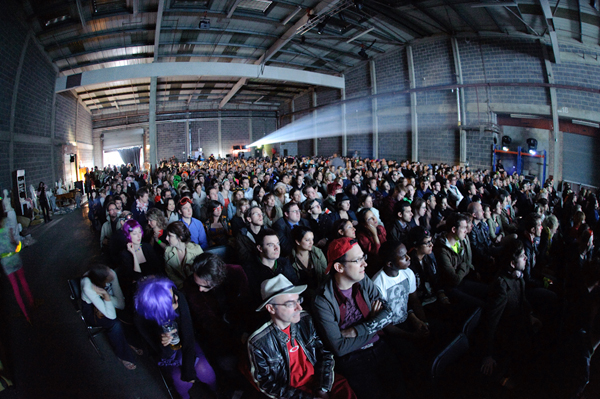 Everyone was then taken to a room next door where we sat down and prepared ourselves for Ridley Scott's Sci-fi cult classic Blade Runner. As first time viewers, Lisa and I were certainly in the minority but nothing could have prepared us for the next 117 minutes. 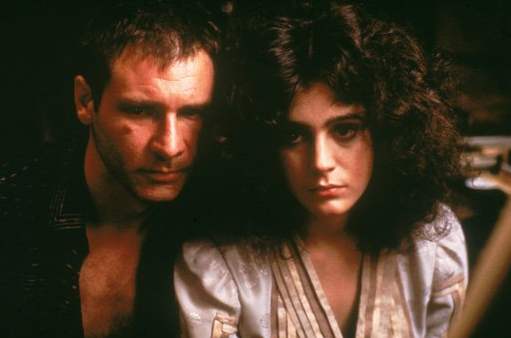 Released in 1982, Blade Runner depicts a dystopian Los Angelos in 2019 in which genetically engineered robots called replicants are being manufactured by the all-powerful Tyrell Corporation. The film stars dishy Harrison Ford playing Blade Runner Rick Deckard who has been appointed to clear all replicants. The film is pretty heavy from word go and there were points where I had to close my eyes, particularly the scene where someones eyes are poked into the back of their brains. My favourite character was Rachael, a trusted robot who The Blade Runner reluctantly yet deeply falls in love with (see above). 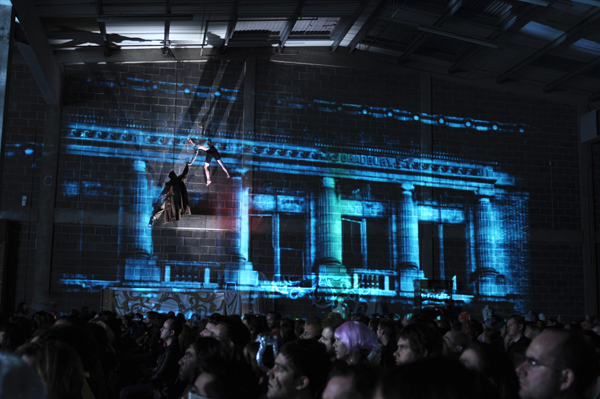 To make the ending scene even more epic, the famous fight was reenacted live on the wall beside us with the help of a giant projection (see above).Â  The best thing about the film was that I already felt like I knew all the characters as I'dÂ  been hanging out with them for an hour next door beforehand. At the end, I left feeling totally surreal; like I'd been transported into another universe and now it was time to go home. And what an adventure it was!

To get a real visual impact of the event take a look at this video.

So if you are looking for a bit more than a box of pop corn, some 3D glasses and a bag of pick n' mix next time you go to the cinema then I'd recommend you checked out Secret Cinema. You can find out all the details including information of the August installment on their site at www.secretcinema.org or by joining their Facebook page.