Come dine with us! The Oaf team here are rather obsessed with Channel 4's Come dine With Me and spend a little too much time discussing our hosting plans. The oaf would-be chefs have put their kitchen skills to the test to try and win the culinary crown.Here are the results of what we would cook, who would be our special guests and what jazzy theme or entertainment we would choose! We would love you to send us your ideal dining night in the comments box or even score US on what you think of our hosting skills. Here we go...... Ok so i think my 3 guests would be EDWARD CULLEN- need i explain BETTIE PAGE (in her glory days!not bible bashing days!)- get some tips on burlesque from the queen BOB DYLAN- because i love him and he would have some interesting stories to tell my meal would be mexican themed because its my favourite food and so easy to make and most of it is made by the guests anyways! so nachos to start, followed by fajitas for main and tequila for dessert! entertainment..... well edward and bob could entertain us with music andÂ  we could all have a sing along maybe! and then bettie could do a little show for us! amazing!

Guests: George Lamb, Larry Lamb and Dave Lamb. Starter: Antipasti - bruschetta, green pitted olives, meat platter, dipping oil, bit of cheese thrown in. Main: Chicken wrapped in pancetta cooked with mozzarella and pesto teamed with garlic mushrooms, roasted tomatoes and steamed spinach. Dessert: Chocolate cherry gateau with creme fraiche (probably purchased the night before from iceland due to inablity to cook desserts) Finished off with mystery punch (peach schnapps, cranberry juice, vodka, lemonade and a healthy scoop of strawberry jelly) Entertainment: Ace of Base tribute act (me dressed up in a waistcoat) singing 'All that she wants'. Followed by a game of pin the tail on the sheep. 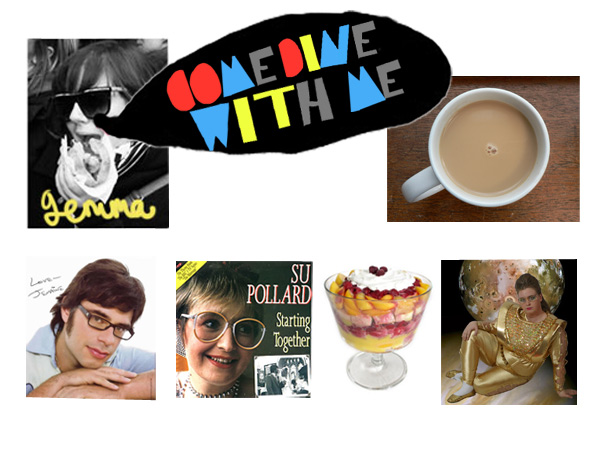 My three special guests would be: Leslie Hall, my new favourite person ever. Sue Pollard Germaine from flight of the conchords Well for starters it would probably be something like mini hot dogs and a bag of dry roasted, or a salad surprise, the surprise being a bag of dry roasted still sealed in the dish. Anyone who has been round my house for dinner normally gets either fajitas or meatballs but since IÂ  have joined fat club I seem to be getting better at the ol'cooking so you might just get a slap up dinner of lemon and thyme roasted chicken with roasted vegetables. However it probably will be fajitas. For pudding i can knock up a lovely cup of tea, and create a leaning tower of biscuits. Or we could have something custard based like custard. I dream of making a gingerbread type house cake one day, this may never be a reality. I might cheat and get my Nana to make something as she is always super good at this! We would have some kind of danceathon and karaoke power ballad sing off. Followed by some come down accoustic strumming and sitting down. We may talk some conversational french and brush eachothers hair. i think this would probably get 10 out of 10. 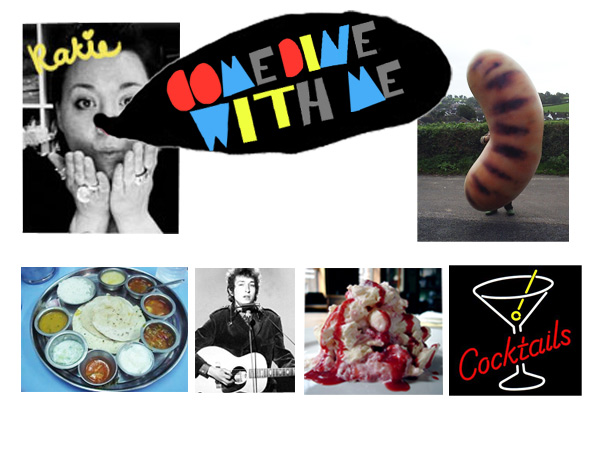 Guests Bob Dylan - singer / song writter / poet Matthew Collings - art critic and broadcaster - read about him he is interesting. Jerry Frempong my boyfriend he is great if I don't want to say anything anymore just listen, he always has something to say Cocktails to start to get everyone loosened up. For me this is more a can't cook won't cook - I can't be good at everything! Popadoms and a pickle tray (I'd try and copy the ones from the Shampan on Brick Lane) Sausages and crushed potatoes with onion and red wine gravey Eton Mess Large Black Coffee Theme/ Entertainment I would dress the table in an ostentatious and ornate way, french/ rococo/ chandelier. I would go for formal dress but feel that all my guests would turn up in un-tucked crumpled shirts and a tie if i was lucky, leaving me lots of space to look glamourous and maybe win some point that way.Â  I would hope that Matthew Bob and Jerry would be entertainment enough as they may end up in some heavy discussion while I dish out the inedible food. 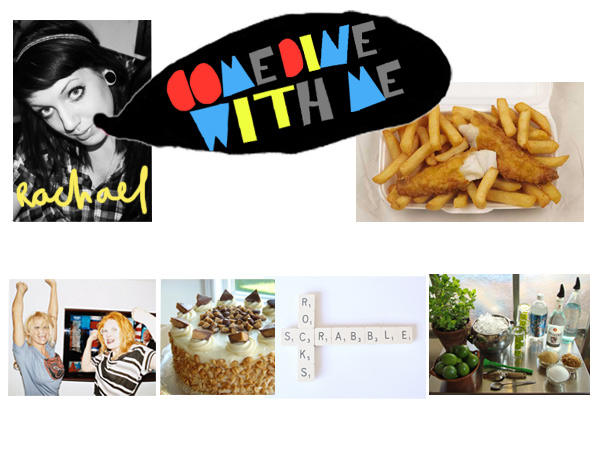 3 SPECIAL GUESTS: I'd want Vivienne Westwood there to have a chat with about working with Pamela Anderson and perhaps as a thank you for dinner she would give me all the handbags/knitwear I want but cannot afford! I'd like writer Charles Bukowski there to have some sort of discussion with involving books and cats and being an author. My final guest would ideally be someone male and handsome to gaze at over the tartare sauce, and that would be Jesse Lacey from the band Brand New. 3 COURSE MEAL: For starters there would be mojitos and lots of them because they are brilliant and everyone could get a bit merry and more talkative! The main course would absolutely have to be takeaway fish and chips from Chez Fred in Bournemouth. For dessert, it would have to involve cake, peanut butter and chocolate. Any combination of these works. Ideally these would form all three courses and all meals ever. ENTERTAINMENT: Boardgames! Particularly Scrabble because I would like to think I am quite good at it and could stand a chance at winning, I'm no good at Twister because of the coordination required 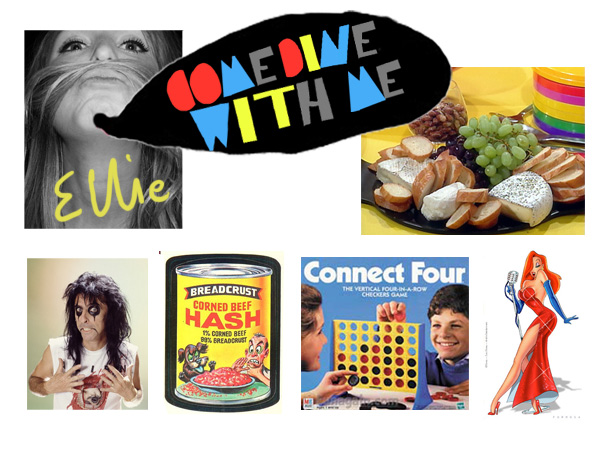 I'd invite.... Alice Cooper Jessica Rabbit ( are you allowed fictional/cartoon characters?) A A Gill We'd eat.... crab, avocado and prawn cocktail corned beef hash ( accompanied by broccoli and carrot and suede mash) creme brullee massive cheese board its a bit retro I know the oldies are the best!! Entertainment... Connect Four championships, possibly followed by Twister ( although jessica rabbits 'assets' might make this tricky so if not we could just play Dream Phone) 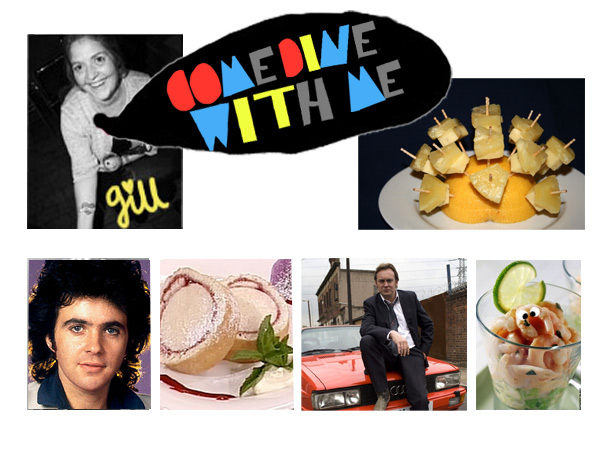 Guests... Gene Hunt but only in character Amanda Steadman David Essex because of his twinkly eyes. The theme would be Abigails party. We would eat... Cheese and pineapple on cocktail sticks stuck in half a grapefruit. Then a prawn cocktail For mains Coq au Vin and dessert Arctic Roll. 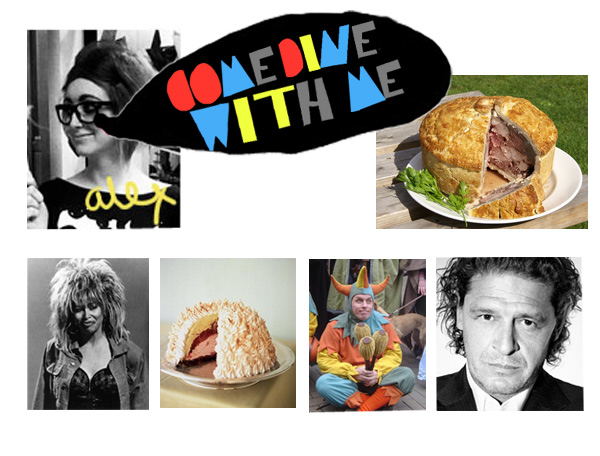 My 3 special guests would be... Tina Turner Marco Pierre White Severus Snape It would have a Medieval banquet style with jester included. We would eat... Starter would be garlic mushrooms. and lots of port from tankers. Main is Game pie handshot by me with Pheasant and venison with white wine and cream gravy. and Baked Alaska. We would then play a murder mystery and run about in the dark together! 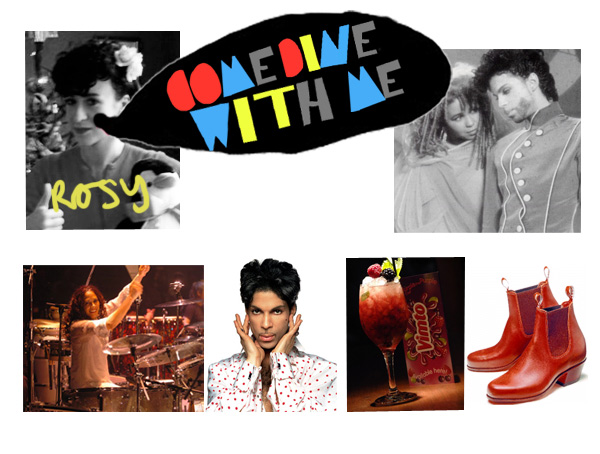 Guests: prince rosie gaines sheila e theme: new power generation party entertainment: drum solo by sheila e rosie gaines performing her 90's hit single "closer than close" prince doing any set he likes as long as he was wearing the trousers with the bumcheeks cut out and a cropped lycra top.and cuban heels. all accompanied with excellent dancing by me. starter:purple palace cheeky vimto's. mains: alphabet street meat dessert: raspberry beret sorbet So what do you think? Who would score what? Or have you got anything better? Get cooking! Lazy Oaf x