On Shoot With Little Jinder Heads up world! Weâve seen the future, its pastel pink and Swedish. Stockholm sensation Little Jinder has been steadily building up a reputation for addictive club electro and a wardrobe to make My Little Pony jealous. We headed down to the set of her new video to style our upcoming Spring collection and talk synthhhhhh.Â

Please introduce yourself Hi! I am Josephine âLittleâ Jinder, from Stockholm, Sweden. Why the name Little Jinder? When I first moved to the UK, I went to a music school in Liverpool called LIPA. I was studying sound technology, I was like the youngest and it was all boys, so they called me little Jinder. When I started releasing music, the nickname stuck. What attracted you to the creative scene in the UK, specifically Liverpool? In Sweden I was really bored. I was always hanging out at the gymnasium, and afterschool club, but I didnât manage to motivate myself to go to actual school! I was just at home, making music, applying to courses everywhere all over the world, just to break the cycle and switch city. Why are we at Cable St studios today? Today we are at Arvida Bystromâs studio, setting up the set for my next music video. Describe the styling on shoot todayâ¦ Its really colourful, its all pastel, so much pink. Super girly, childish colours. Lots of Lazy Oaf ! What are the themes of the video, can you explain your creative vision? The song is pretty bitter, basically itâs about when someone you love finds someone else and you feel really sour towards the new girl. Youâre thinking how can he be with someone so ugly and boring, even though youâve never even met the person and theyâre probably really great! The video is really girly and narcissistic, full of people interacting with objects with my image printed on. Why the vanity? It's kind of like a parody. Itâs hard to say before Iâve seen the final cut, but I think people will find the humour in it, the obsession. Some people will think I idolise myself in an extreme way. Itâs kind of sarcastic, but will also look really cute and heavily styled. I mean it will be kind of true, I am so much better ha! 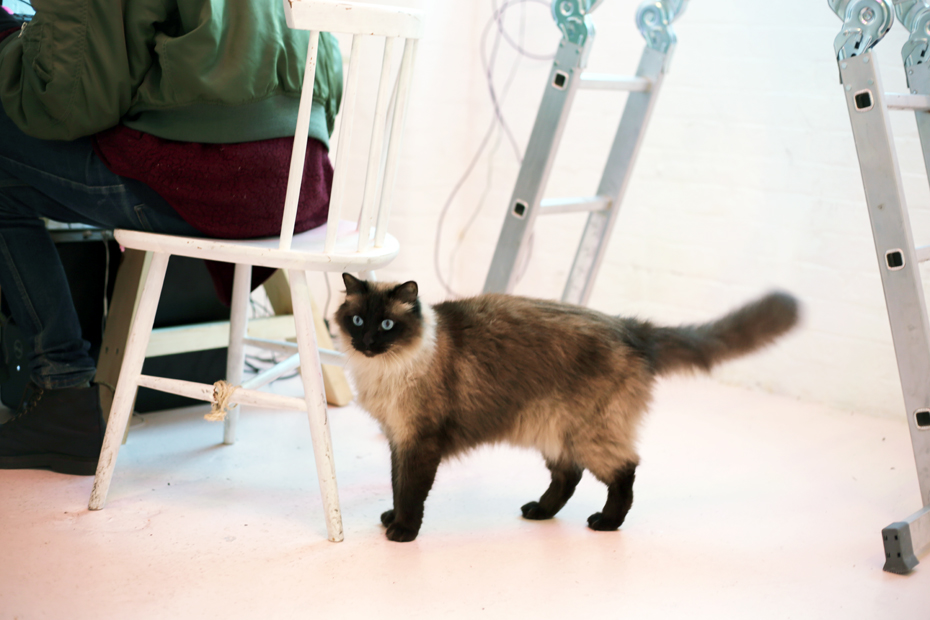 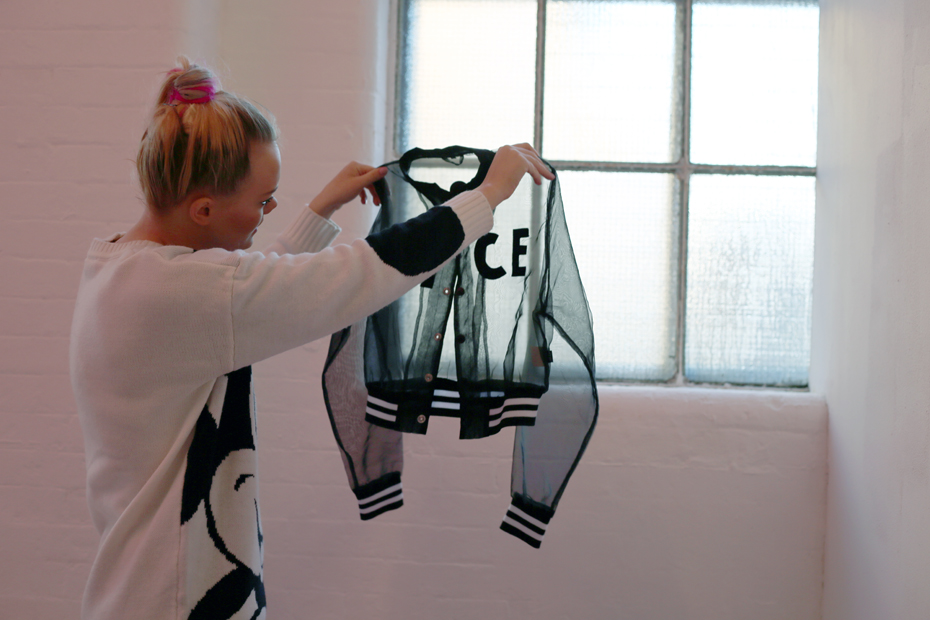 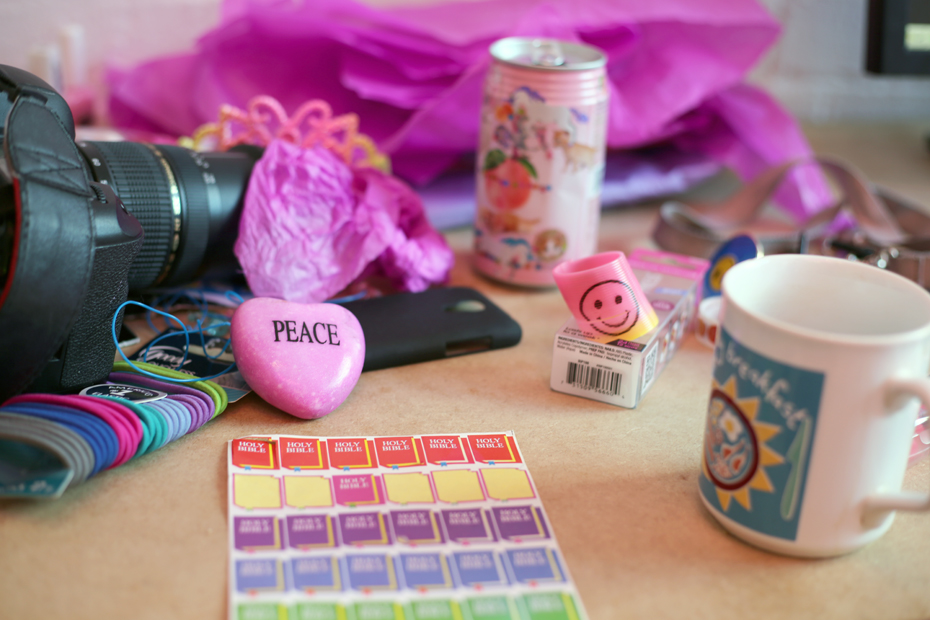 Â  Was this all your idea or do you have a whole creative team around you? Actually for this song, Arvida BystrÃ¶m has a really specific vibe, thatâs why I asked her because she already has this niche towards really cute aesthetics. What is your personal style like? Itâs easier to say what I donât like to wear. I sort of dress to express who I like to think I am on the inside. I feel very bland in simple block colours. I donât feel comfortable in a black dress, I feel like Iâm hiding. I like colours, patterns and going a little too far. I often wake up and feel kinda boring, so I only get more boring if I wear boring clothes. How do you make your music? Iâve always been really interested in home grown technology, I got my first synthesizer when I was like 16. So it's basically me getting into the studio and playing around with things, trying to build a sound picture that I can puzzle together. Iâm working out the sounds individually. I kind of build an audio world and get a picture in my head. What tools do you use? It's hardware and software, itâs a bit messed up. The final mixing is with a producer called Freakberg, he was real hot in the nineties. He has loads of outboard, I donât have a preference, and I wouldnât automatically know the difference myself but its just more fun and I like including analogue process in my tracks. What big plans and aspirations do you have for the new season? So I released an album in May, but Iâve struggled a lot working out my next step, I felt it was starting to sound the same. Iâve always sung in English, never in Swedish. Then I re-recorded a tune in Swedish and it just completely changed the whole experience. Especially writing not just singing it. So now I am really working on a full Swedish EP. Why do you think people connected with it more in your own language? I still get âoh Little Jinder? I didnât know you were Swedish!â So they did know of me, but it wasnât such a big deal, it didnât connect. I originally released my music on an American label, up until last year. Club kids into Swedish house music knew the label and they were familiar with this underground scene, but nobody knew I was a native Swedish girl. It was a real game changer in terms of radio and media attention, because I was homegrown! Has your style changed a lot as an artist now that youâre performing live and traveling more? Yes! It's exaggerated. I mean Iâve never really been a big shopper, my money always goes on music. But when I started performing more I realised I need to dress better. It sort of connects the dots, between visual and audio. I perform so much better. Even if itâs a boring Tuesday and Iâm just in the studio, I feel like if I wear something that looks how the music sounds, I get more energy. I perform so much better. The experience of playing live is so much more fun.

What was your favourite Lazy Oaf piece from today? I think the ugly outfit, this is a typical lightweight shirt that I can wear anyday with some cool trousers and my metallic Nikes. Iâm really happy to find a matching set that fits me so well. Do you have any style staples you cant handle life without? Nike, only Nikes. I probably own about 20 pairs, it is because I started running a lot. Everyone does it the wrong way around these days but I genuinely live in them as a sports shoe, and they just happen to look sick. Iâve been training for a Nike half marathon in San Francisco. Any lasting words for aspiring creativesâ¦ Learn Swedish and stay ugly. Little Jinder wears items from the forthcoming Lazy Oaf Spring / Summer '14 collection. You can watch Little Jinders brand new video featuring our clothes below.