When us Oafs get the munchies, we like a side order of snap crackle and pop! So we couldn't resist bonding over Brekkie with East London's latest food venture, the Cereal Killer Cafe. Twin brothers Alan and Gary Keery have dedicated serious time and energy (supplied by Ready Brek obvi) to creating the UK's first shrine to cereal. Earlier this week we got an exclusive sneak peek, and we're not afraid to milk it... -------------------- So where did your love of Breakfast nostalgia begin? A. Probably all the trips to the supermarket as kids! We'd be allowed to pick one box each, just scouring the aisles for the best toy giveaway, getting home and rummaging your arm to the bottom of the bag. G. Like The Mask pencil toppers, and the mini variety packs, but you need like 3 of them to make a full bowl. I'm not a great cook so most meals are cereal, cereal everything. So what is your favourite and why? A. It will forever be the discontinued "Banana Bubbles".Â  It was like rice crispies but banana flavour and they turned the milk into ânana milkshake! Apparently they stopped it because it gave people cancerâ¦ yeah maybe thatâs just a rumour. How about nowadays selection? A. Now it would be Reeses Puffs! Peanut butter and coco, its just so good. Anything peanut butter I love. G. I think we have about five different peanut butter cereals here alone! 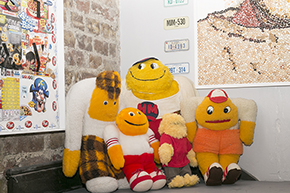 What is the weirdest bowl youâve tried? A. Thereâs a few weird ones weâve been stalking for years, but at the moment "Popping Pebbles". They're pink and purple flakes with little green balls of popping candy! How does a usual morning start for you guys? A. Always with a bowl of cereal, and a lot of the time we finish with one too ! Whatâs your opinion of people that eat cereal dry with no milk!? The filthy box raiders... A. Haha! Oh but you know there is one exception. Krave is great out of the box! So whatâs the concept behind your new cereal parlour? A. As you come in here every single piece is related to cereal. The memorabilia, the art, the framed double cheerio we bought on Ebay! G. We serve eighteen flavours of pop tart, like "confetti cupcake", as if we know what confetti tastes like! But what weâve always wanted to deliver is just the nostalgic cereal experience, we want people to leave just drowning in cereal. 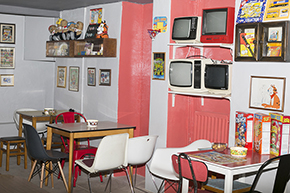 Is it the packaging or the actual food itself thats captures your imagination? G. I think the artwork on some of the vintage boxes is beautiful. All the colours and characters are amazing. The two countries that truly appreciate it as an art-form are Britain and America... A.We get the weird packaging right, but America's flavours just take it to the next level. Do you have an all time favourite character?Â  A. Thatâs hard, but I have to say the Honey Monster, classic British freak right there. Heâll be here on the official launch on Wednesday... Really ! So who has the pleasure of dressing up in that costume? Oh no, there's no costume. Itâs the Honey Monster himself, the actual guy, the real deal. ------------------ Find out more about Cereal Killers Cafe ahead of tomorrows launch here and follow their Twitter for regular updates. Check out our 'breakfast time anytime' array of gifts in the Get the Look section below.