Posted 10th December 2014
"Rapping as I'm mocking deaf rock stars, Wearing synthetic wigs made of Anwar's dreadlocks". Like 72 million others, you've probably heard of LA's Anwar Carrots before. He's a friend of Tyler The Creator and a known face in Holywood's Fairfax scene, but what many don't know is that Anwar himself has carved out a fairly large stake in Los Angeles creative community. Armed with our photographer Lloyd Pursall, we decided to find out more about the man behind those infamous orange dreadlocks... --------------------- What's up Anwar! This editorial has been a long time coming, far from being Lazy it's been a very busy and successful year for you, run us through what you've been up to? As far as this year goes Iâve kept myself busy as Creative Director/Founder of Peas & Carrots International, and managing artist Casey Veggies. I released my first Anwar Carrots signature Collection with Puma which included T-Shirts for Men and Women, Sweatpants, Tank Tops, and two color ways of the classic Puma Suede. I recently traveled to South Africa for a Puma Select Q&A at their Johannesburg store. Also got the opportunity to head down to Cape Town where we held our Pop-Up Shop for Peas & Carrots International at Boaston Society on Long Street. My trip to South Africa was followed by another successful Pop-Up at Infinite San Francisco with Rap Collective âHeart Break Gangâ to tie in with their Heart Break Halloween Show at The Warfield, shout out Iamsu! This past month I also got the opportunity to design a ZX Flux for the launch of Adidas mi ZX Flux Photo Print App Exhibition for NYC & LA. Other than that just trying to stay focused and be creative. For someone who works so impressively closely in various aspects of the creative field, be it music, fashion or design, how would you describe yourself and define your role? Iâll describe myself as my name, Anwar. Anwar is an Arabic name which means âThe Lightâ, âLuminousâ, âBrilliantâ, and âEnlightenmentâ. My dad named me after the late Egyptian President Anwar Sadat. I try to live up to my name as much as possible. To âdefine my roleâ or give it a job title Iâm confident with Creative Director. Thank you Nigo for paving the way. Is there a particular element of your work abilities which you feel most passionate about? How do you manage to balance it all? I am more passionate when it comes to the clothing aspect of everything. As far as balancing, itâs not a walk in the park but I do what I have to do. Iâve learned to ask for help when it's needed, you canât do everything on your own. In an ideal world anyone would love to just focus on their craft whatever that one thing may be. I would say this though, stick to what you are good at and get betterâ¦ persistence!

Were there things in early life which set you on this creative path? All credits due to my father for that. I got into the whole love of clothing from that man at a young age. Watching him shop on South Street in Philly as a youth during our Winter trips to Trenton were inspiring to me. It was crazy how serious he took shopping for the right piece for him to rock- It was also annoying he would take so long, ha! I would want to thank Chris Gibbs & Pete as well. Walking into Union on La Brea back in 2005 changed my life forever. I always had a thing for tees nobody else was rocking in my circle, and that store hit it right on the nose for me back then. Best believe I had so many questions when I walked in! I am still like that today. Never be afraid to ask questions, a closed mouth wonât get fed... What were some of your early cultural inspirations and influences growing up? Be that in TV, Film, Music, Art, whatever... As a kid, I used to watch all of the African-American shows with my mother and father before it was time for me to go to bed for school. In the late 90s to the early 2000s WB & UPN had the best shows. My favorites to watch were: The Parkers, Girlfriends, The Hughleys, In The House, Malcolm & Eddie, Moesha, The Jamie Foxx Show, The Wayans Bros. The Steve Harvey Show, and The PJâs. Films I grew up on were Baller Blockinâ, Players Club, Booty Call, Mo Money, Menace II Society, Low Down Dirty Shame, Boyz N Da Hood, Ride, Set It Off, Friday 1-3, Space Jam, I Got The Hook Up, Paid In Full, State Property 1-2, Boomerang, A Thin Line Between Love & Hate, Bebes Kids, Donât Be A Menace, and a ton more thatâs what I can think of off the top of my head. When it comes to music I grew up on a lot of Reggae, Soca, and Calypso music since my family is from the Virgin Islands. Artist ranging from Buju Banton, Spragga Benz, Lady Saw, Mr. Vegas, Red Rat, Hawkeye all the way to Jam Band from St. Thomas RIP Nick Daddy Friday. I also grew up on a lot of R&B and Neo Soul artist like R. Kelly, Ginuwine, Dave Hollister, Case, Sisqo, Jagged Edge, Jill Scott, Bilal, The Roots, Floetry, Mary J. Blidge and many more. As far as rap my influences were Juvenile, Busta Rhymes, 50 Cent & G-Unit, Kanye West, T.I., Young Dro, Young Jeezy, DMX, Jim Jones, Missy Elliot, and Jay-Z. I wasnât up on art until I got a little older and learned who Takashi Murakami & Kaws was from listening to Kanye & Pharrell. Being in Los Angeles and around some of the galleries and certain people has helped me to learn about about art and artists, all I really knew were masks from Ghana which my dad would cop for the crib, ha ha! 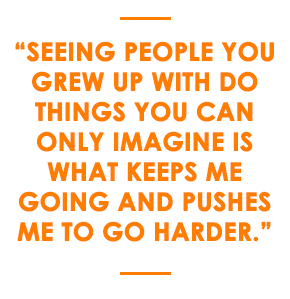 And how about now, as someone who is involved in the L.A scene are you still able to be inspired by your city? Absolutely, as of recent I was able to witness Tyler, The Creator put on his own Carnival and Music Festival in the city he resides, seeing the line for merch with hundreds of kids, meet & greet lines with hundreds of kids, thousands of people in attendance, his face on a billboard, his logo on a Ferris Wheelâ¦ inspiration to the maximum! Seeing people you grew up with do things you can only imagine is what keeps me going and pushes me to go harder. What / who are you listening to at the moment? Iâve been listening to Kid Cudiâs âA Kid Named Cudiâ 10 Deep mixrtape also his first album âMan On The Moonâ, Future âMonsterâ Mixtape, Wizkid âAyoâ Album for the Nigerian in me, currently been riding with my love listening to Key! ft. Omari Shakur- Make My Mind Up (Noah Zark Edit) on repeat big ups to Peas for putting me onto to that song! How is 2015 looking? Do you have any exciting projects lined up? 2015 is looking very refreshing for me, basically the next chapter in my life. One project I do have lined up is a gallery & retail space I am curating with Scion AV in Los Angeles for the month of March. Keep a look out for that... Some words of wisdom to leave with our readers... My words of wisdom for those reading come from the enlightened Mata Amritanandamayi... âQuite naturally, leaves wither and flowers fade. Only if we clear the decay of the past then and there can we really enjoy the beauty of the new leaves and flowers. Likewise, we must clear the murkiness of the past bad experiences from our minds. Life is remembrance in forgetfulness. Forgive what ought to be forgiven; forget what ought to be forgotten. Let us embrace life with renewed vigor. We should be able to face every moment of life with renewed expectation, like a freshly blossomed flower.â ----------------- Find out more about Anwar, by following him on Twitter here. In LA? Stop by his PNCINTL store and say what's up! 311 N. Edinburgh Ave LA CA 90048.